The ideal Holmes show: Sherlock lives again at the Museum of London

The first exhibition devoted to the detective for 60 years is a joyous celebration of the sleuth in all his guises. Click above to watch Ian McKellen on Holmes, and the second tab for our interactive map (phone app users go to thetimes.co.uk/arts)

Before you ask: no. The Museum of London’s new Sherlock Holmes exhibition, the first of its kind since the Festival of Britain in 1951, does not reconstruct the sitting room at 221b Baker Street. Alex Werner, the museum’s head of history collections, who also oversaw the acclaimed Charles Dickens and London in 2011, sighs quietly when the subject arises. “We decided early on that we weren’t going to do that,” he says. “It’s been done over and over again.”

This much is true. In London alone at least two Sherlockian attractions offer the full fireside tableau: the Sherlock Holmes Museum on Baker Street, where a man with a white moustache pretends to be Arthur Conan Doyle and you can see Sherlock’s teak-seated toilet; and the Sherlock Holmes pub in Charing Cross, which bought most of the collection assembled for the Festival of Britain display — though not, presumably, the fresh crumpets that used to be left out every day with two different sets of bite marks in them. (Insert here your own 1950s-vintage joke about Holmes and Watson “sharing crumpet”.)

You can buy deerstalker hats in the Museum of London shop — classy ones, made by Christys’ in a specially designed “urban” tweed — but it feels like a concession to traditionalists. Subtitled The Man Who Never Lived and Will Never Die, the exhibition is more intellectually satisfying than its permanent rivals because it recognises that while it is only polite to inquire into Holmes’s origins it no longer makes sense to tether him to a specific period.

Fans of the Guy Ritchie franchise might disagree, but Holmes’s present massive popularity is mostly down to the ingenuity of the BBC’s Sherlock, which wrenches him out of the Victorian era and into ours while preserving a fanboy-strong flavour of the original stories. The Museum of London’s show attempts a similar feat of time slippage, emphasising how Doyle’s Holmes was a contradictory amalgam of fin-de-siècle stereotypes — idle Bohemian drug addict and Nietzschean superman — which subsequent reinventions have refined.

Of course many — most? — visitors will make a beeline for the now-iconic Belstaff coat and Derek Rose camel dressing gown worn by Benedict Cumberbatch. Werner is sanguine about that. “The challenge is pleasing all the different interest groups,” he says. “Some only know Sherlock Holmes through the BBC show, but once they get sucked in they want to know where it’s come from. It helps that Steven Moffat and Mark Gatiss have been so clever with their scripts.”

The great detective’s fictionality is celebrated from the very start. We enter the galleries through a door in a wall of books, some of them Holmes’s own monographs — eg Practical Handbook of Bee Culture, with Some Observations upon the Segregation of the Queen — and find ourselves, in Werner’s words, “bombarded by Sherlocks” on posters and on a wall of screens showing all the different actors who have played him.

It’s a long list, starting with William Gillette, who performed the role 1,300 times in the theatre and whose 1916 film based on his Holmes stage play has recently been discovered after decades of being thought lost, and taking in Jeremy Brett, Roger Moore, Rupert Everett, Christopher Lee et al.

Having made the point that the detective is an unstable entity, the exhibition shuttles us, with a force that is almost moving, to a moment of serene singularity: Holmes’s birth. We see the page in Doyle’s notebook where he jotted down ideas for the first Holmes tale,A Study in Scarlet. Holmes still has the Christian name “Sherrinford” and his assistant is “Ormond Sacker”. (There is also, a little further on, the manuscript of The Adventure of the Empty House, Holmes’s 1903 comeback after his “death” fighting Moriarty at the Reichenbach Falls. Doyle’s strong, neat handwriting, barely sullied by corrections or crossings out, exudes confidence and purpose.)

Holmes did not appear out of the ether fully formed, though. On loan from the Free Library of Philadelphia is the faded, ink-splattered manuscript of Edgar Allan Poe’s The Murders in the Rue Morgue of 1841, which most scholars agree is the first proper detective story. Doyle was a huge fan of Poe and his detective C Auguste Dupin, who employs what Poe called “ratiocination” to solve crimes using a Holmesian combination of intellect and imagination. Where Holmes outsmarts Dupin is in the field of forensics and Werner has duly borrowed early fingerprinting paraphernalia from University College London’s Galton Collection. 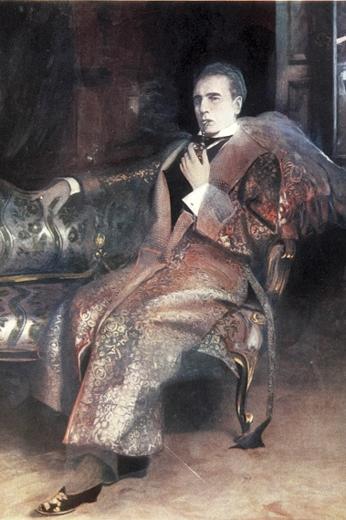 There are only 11 copies left in the world of the 1887 Beeton’s Christmas Annual in which A Study in Scarlet first appeared. Thrillingly, two of them are here, alongside several issues of The Strand magazine (where the bulk of Holmes stories were published) and first editions. Was sourcing these relics tough? Yes and no, says Werner. The late Doyle scholar Richard Lancelyn Green bequeathed his vast collection of Holmesiana to Portsmouth council in recognition of Doyle’s strong links with the city. (The former doctor set up his first medical practice there.) That proved a rich resource; ditto the Doyle family, who lent pictures, manuscripts and, wonderfully, a postcard that Doyle sent his son from Dartmoor while he was there researching The Hound of the Baskervilles. Visitors are invited to find it, hidden on a wall surrounded by other contemporaneous postcards.

Sidney Paget’s drawings in The Strand magazine have done more than anything else to establish our visual sense of Holmes and the clever way they were mapped into the text anticipates comics and graphic novels. This exhibition needed a strong Paget element, not least to make the point that the original drawings are different from the engraved versions that appeared in print. Yet here Werner hit a roadblock: “I was near to despair trying to secure Paget artwork. There are two or three drawings in public collections, but they weren’t prepared to lend them. In the end, two generous US collectors lent us six original drawings from the stories.”

The museum also managed to borrow a silver cigarette case given to Paget by Doyle as a wedding gift (it is inscribed “from Sherlock”) and from Switzerland a handsome portrait of Doyle painted by Paget in 1897 and never before seen in this country. It shows the author in his pomp with his notepad at the ready and, intriguingly, asymmetric pupils — a detail that doesn’t show up in any other painting or photograph.

Some of the most memorable exhibits are from the Museum of London’s own collection. There are wigs and costumes worn by the actor-manager Henry Irving, hawkishly similar in appearance to the popular depiction of Holmes. Watson compares Holmes at one point to an “automaton”, which we interpret today as “a bit robotic”. The remark relates specifically to mechanical puppets and readers would have imagined something like the “Psycho” figure that the exhibition also includes. Dressed in a Chinese-style silk tunic, the Psycho once entertained Victorian visitors to the Egyptian Hall at Piccadilly — a sort of exotic arcade — by playing card games and smoking a cigarette through a holder. (Psycho was operated from below by bellows.)

London is often said to be the “third character” in the Holmes stories despite experts disagreeing over how well Doyle actually knew it. The atmosphere of a city in transition — dirty, frenetic, traffic-clogged — is caught beautifully here in cine film from 1903 and in Alvin Langdon Coburn’s haunting photogravures, which exploit the bizarre light effects caused by the smog.

Like Charles Dickens and London, this exhibition is heavy on pictures — parents of small children who have come to see Cumberbatch’s coat be warned — but they are well chosen. John Atkinson Grimshaw’s 1881 painting Hampstead Hill, looking down Heath Street, with its solitary female figure in the foreground, is pregnant with mystery (what is happening behind those gaslit windows?), although the swirling gothic horror show of John Anderson’s 1872 painting of the Houses of Parliament, then recently built, is an acquired taste.

Doyle plotted Holmes and Watson’s journeys across the capital using a Post Office map. The accompanying directory, bloated with firms’ addresses, shows how complex and multifarious a city London had become by the 1890s. Victorian readers needed Holmes’s clarifying intelligence to make sense of it. The question of what our continuing need for him says about us is one that this exhibition does a thorough, entrancing job of answering. And not a crumpet in sight.